Cracow, undoubtedly, has been considered the most enchanting city in Poland. Long and valuable history of the Polish Kings City may be seen in almost every corner of the Old City. The numerous universities and academic atmosphere cause, despite of its age, that Cracow is still young, and the valuable cultural offer attracts tourists from all over the world. One- or two-day walk seems the perfect way to visit the city. It all depends on you how much time would you like to spend there. 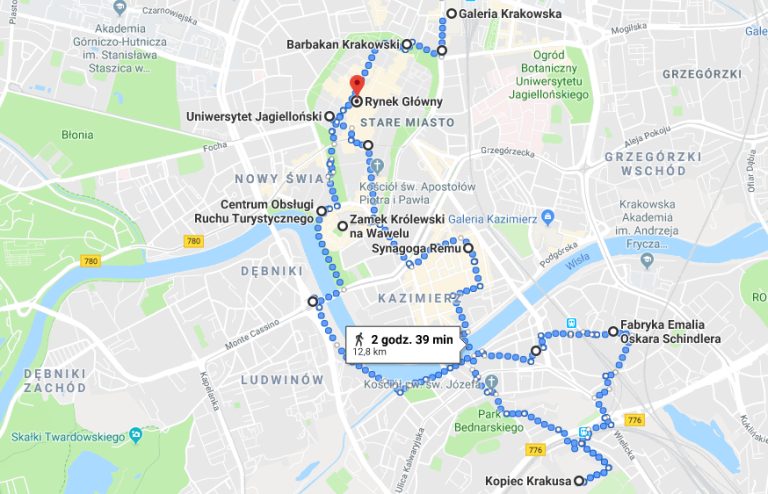 The Main Railway Station is located in the vicinity of the Old City in the Galeria Krakowska shopping mall. The modern platforms as well as number of railway connections from all over Poland and other countries, like Hungary, Czech Republic and Austria make Cracow one of the most important city in Poland. Leaving the shopping mall to the Jeziorański Square we may admire the XIX century building of the Station surrounded by the historic buildings. We are heading to the subway passage that lead us…4 min 400 m 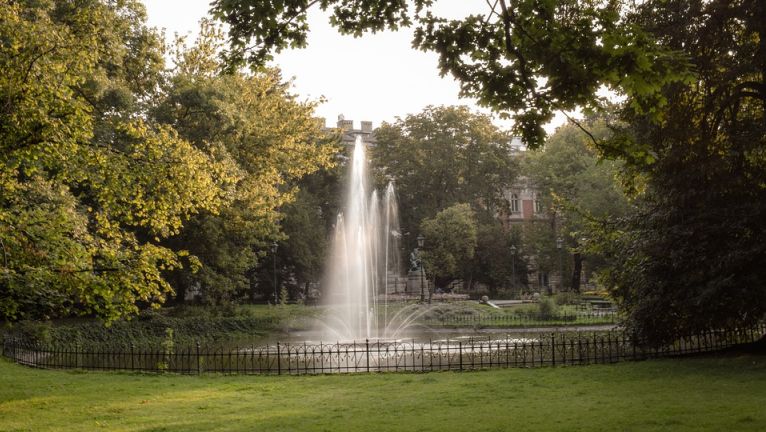 The Old City is surrounded by the green ring called Planty, near to the former city walls erected during the Austrian reign. Nowadays, it is the recreation grounds where citizens come to rest and walk. The Planty symbol is the Barbakan, fragment of the XV century fortification of Cracow. From Barbakan we move through the Florian Gate to…5 min 200 m 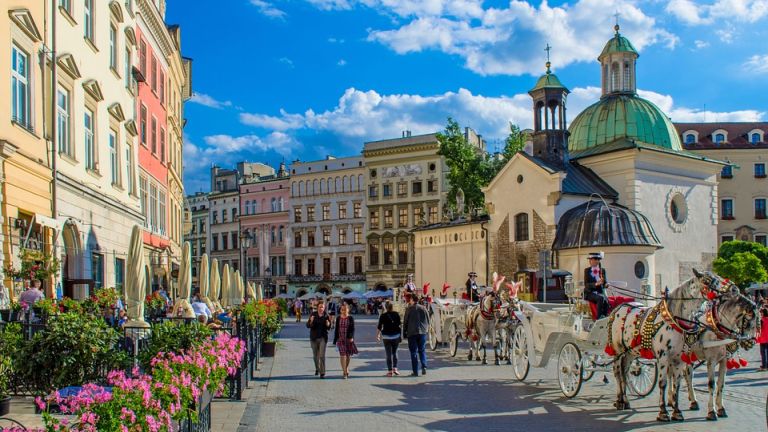 The Florianska street is a part of the Royal Road, spreading between the st. Florian church and Matejko square as well as The Royal Castle on Wawel. The Royal Road used to be the exclusive drive in during coronations as well as holiday marches. Contemporary, the Florian street has been one of the most exclusive shopping street as well as numerous souvenir shops. After a few minutes we reach …5 min 200 m

The old city centre and the Cracow symbol at the same time. The impressive area of 4 ha, makes it one of the largest in Europe. In the landscape of the old city you may see the famous horse-drawn carriages, the st. Mary Basilic, the Town Hall tower as well as Krakow Cloth Hall (Sukiennice) – the former trade stalls. Nowadays, in Sukiennice, you may purchase interesting amber products as well as the folk crafts. The market is surrounded by numerous cafes and restaurants, which create a coloured ring surrounding the centre. 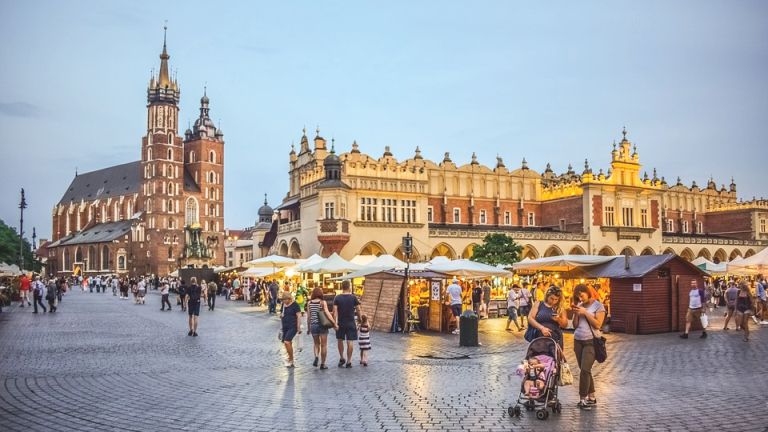 The Main Market houses museums. An interesting one seems to be the Market Underground museum, where tourists may learn about the city history and observe how it was changing within centuries. On the first floor of the Sukiennice, there is the XIX Century Polish Art Gallery, where the most renowned artists from that period paintings are exposed. The Gallery visit allows you to admire the Market from yet another perspective – overground one. That spectacular view is possible from the museum cafe balcony. From the Market along the st. Anna street we are heading to …4 min 350 m 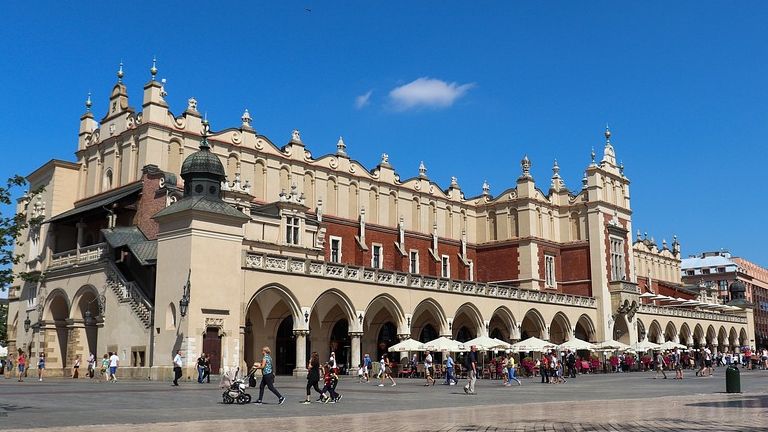 The Jagiellonian University in Cracow dates back to 1346 and King Kazimierz the Great times. As far as the XIV century came students from all over Poland and other countries. The oldest building of the University is the Collegium Maius, founded by Queen Jadwiga and king Wladyslaw Jagiello in 1400, nowadays it houses the Jagiellonian University Museum. The name of the university comes from the royal pair and it has been functioning, constantly, since that time. After visiting the university area we are coming back to the Market, to…5 min 1,1 m 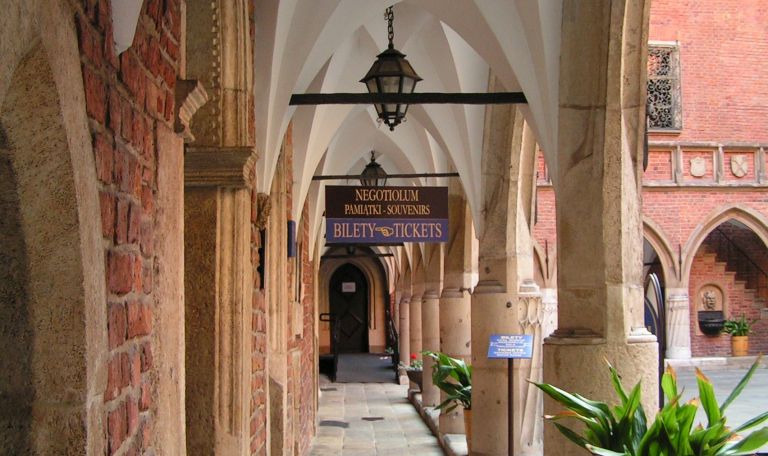 The Royal Castle on  Wawel

We continue the walk along the Royal Road, through which along the Grodzka street we reach the Wawel Hill. The earliest data about settlement comes from the XIII century. Soon, the settlement became the first rulers seat of Piast dynasty. The first Roman architecture comes from that period, as well. After the country fragmentation, king Wladyslaw Lokietek initiated the gothic castle expansion that was continued by his son – Kazimierz the Great. The final look of the Royal Castle on Wawel has been finished by the Jagiellonian dynasty. The famous arcade courtyard comes from that period, the symbol of the castle. The castle may be visited both from outside and inside by choosing the subject and the route of sightseeing. Next, along the Stradomska street we are heading to…12 min 1 km 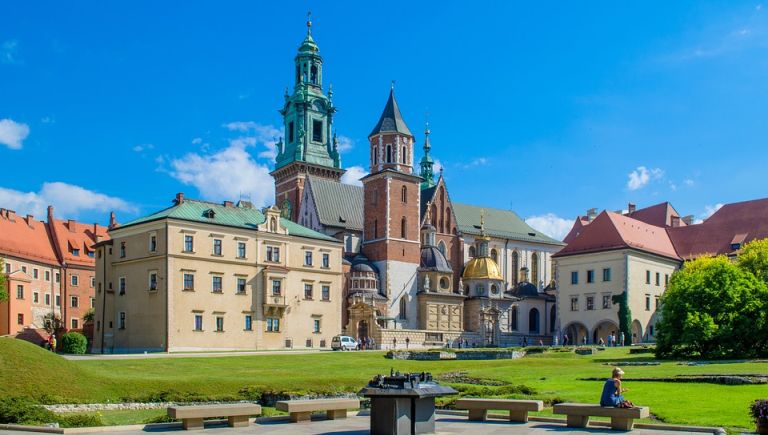 Kazimierz the Great is also associated with the former Jude district in Cracow that was even named after him. The Kazimierz district was erected as the separate municipal area in 1335 and was the first Cracow Academy seat. At the end of the XV century Judes started to settle there and it thanks to them that Kazimierz mostly owns its identity, visible, among others, in the historic buildings like the Old Synagog, Tempel or the Remuh Cemetery. Nowadays, the district life in Kazimierz is concentrated in two squares – The New Square and the Wolnica Square, by which numerous, picturesque and moody clubs and cultural spots are located. From the Wolnica Square across the bernatka bridge we are moving to the other side of the Vistula River to …18 min 1,5 km

On the right side of the Vistula there is a district that apart from its growing popularity maintained its atmospheric character. Among the historic buildings, colourful cafes and dreamy streets you will come across the XIX century st. Joseph church in the Podgórze Market. Behind the market, with walking isles, spreads moody Bednarski Park that will take us to Krak Hill. From the hill you may admire Cracow and its nearby panorama. 28 min 2,3 km 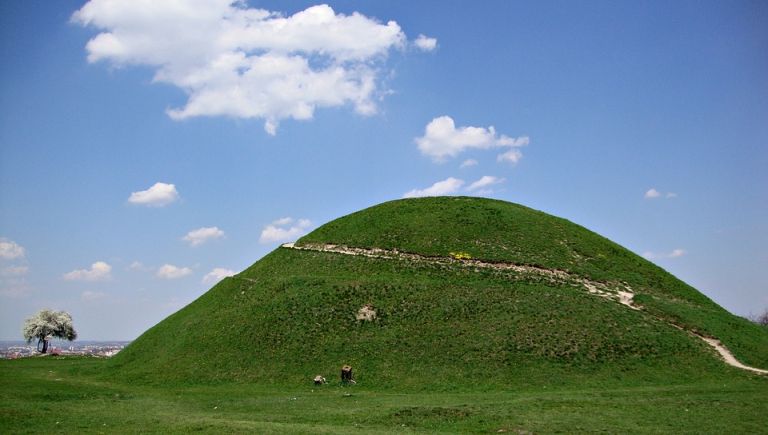 The most popular among tourists from all over the world is the Schindler’s Factory, the spot of the authentic history that was pictured by Spielberg in the film under the same title. The other important spot associated with the Holocaust is the Under the Eagle Chemist’s (Apteka pod Orłem) as well as the Ghetto Heroes Square (Plac Bohaterów Getta)  with symbolic empty chairs. 25 min 2,8 km

After a day-long sightseeing it is good to have some rest. From the Plac Bohaterów Getta we are moving toward the Vistula to enjoy the adorable panorama of the Vistula curve and the Royal Castle, Kazimierz and protruding towers of the st, Mary’s Basilica located on other side of the river. The Vistula Boulevards are ideal for an evening walk in the light of the setting sun as well as tasting the Cracow obwarzanek (bagel)! Along the Vistula bank we are coming back to the Castle, and a stone’s throw distance, along the Planty park, to the Market. 49 min 3,9 km

More scenarios for train travels across Poland and Europe 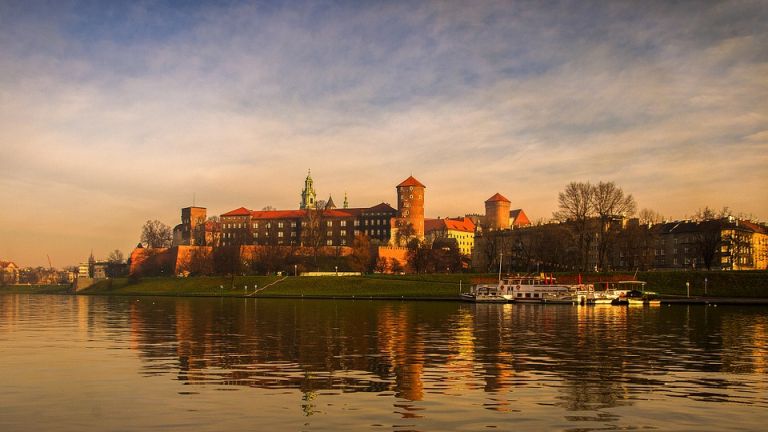 How to acquire a ticket to Cracow?

Booking and tickets purchase online to Cracow on PKP trains, Intercity, Pendolino and TLK to be accessed at PolishTrains.eu.