France was the first country to introduce the high speed trains. TGV (Train a Grande Vitesse) nowadays is the most recognisable fast trains brand in Europe. They represent modernity, speed, comfort and civilization success.

The TGV trains means around 2 thousand kilometers of high speed train connections. The TGV trains beated the speed record on the 3 of April 2007 reaching up to 574,8 km/h on the TGV Est route from Paris to Strasbourg.

By train across Europe

The train network in Europe is vast and connects almost the whole continent. Thanks to this train travel is the best way to visit European countries. You may start your journey in France and finish in Switzerland, for instance. TGV Lyria offers such connections. The company is owned by SNCF. That contemporary renovated train connects such cities like: Paris, Lozanna, Bern, Geneva, Bazylea, Marseille, Montpellier and Nice.

All the TGV Lyria trains from France to Switzerland has been designed in modern matter, they are equipped with the comfortable chairs and space for feet. There are three classes to choose from:  Economy Class, Comfort Class, Premiere Class (not all routes). 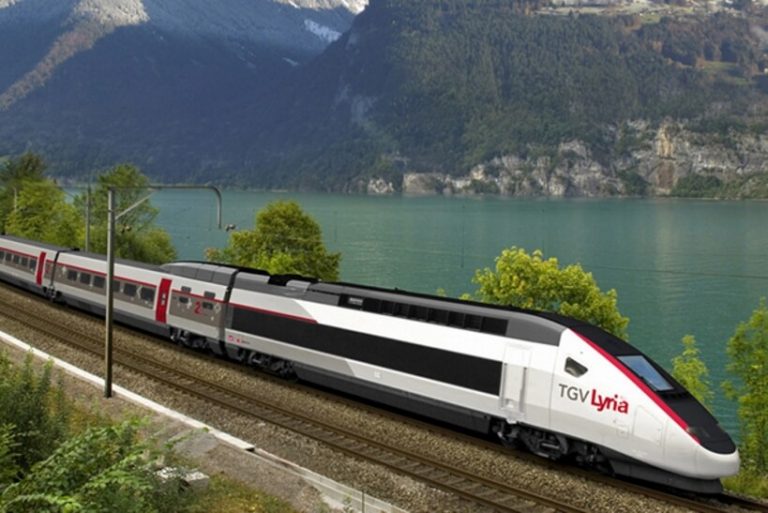 The display show information in three languages: French, German and English for greater convenience of the travellers. On all trains smoking is strictly prohibited.  On the board there is a bar offering a wide range of meals, sandwitches, desserts and drinks.

Passenger satisfaction after traveled by a high-speed TGV Lyria guaranteed. The cheap TGV train tickets can be purchased through our service –  PolishTrains.eu