Incredible tourist attractions, impressive cultural options as well as the small cafeterias atmosphere make Vienna the beloved place to be, worldwide. The historical city centre, entered into the world heritage UNESCO list, enchants the visitors with any epoch historical buildings. Due to that richness, Vienna belongs to the most frequented cities in Europe. The meandering Danube river invites to go for long walks. We propose 5-hour long sightseeing trip. It depends on you how much time you want to spend in each place. 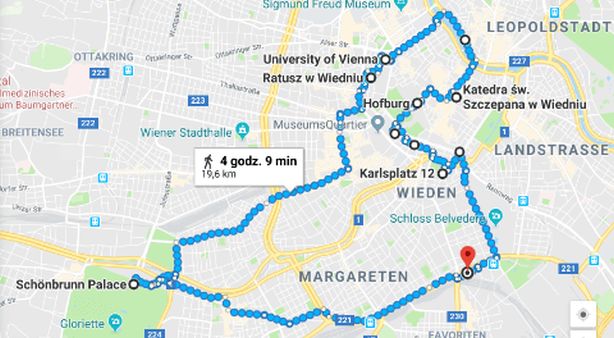 The Vienna Hauptbahnhof railway station is the most modern and the most important both international and countrywide communication hub at the same time in Austria. It supports Vienna Warsaw, Katowice or Cracow as well as Bratislava and Budapest railway connections. You may also travel to Italy and Germany. At the Hauptbahnhof bus stop take 10A bus and go to Karl-Popper-Straße until you reach …. 9 min 1 km

The XVIII century palace and park area consisting of two buildings – The Upper Belvedere and the Lower Belvedere – separated by the French garden, houses the works of art, like the the imperial family paintings collection and Gustav Klimt’s ones. Opens everyday from 10 to 12. Then we move on to ….. 17 min 1,4 km 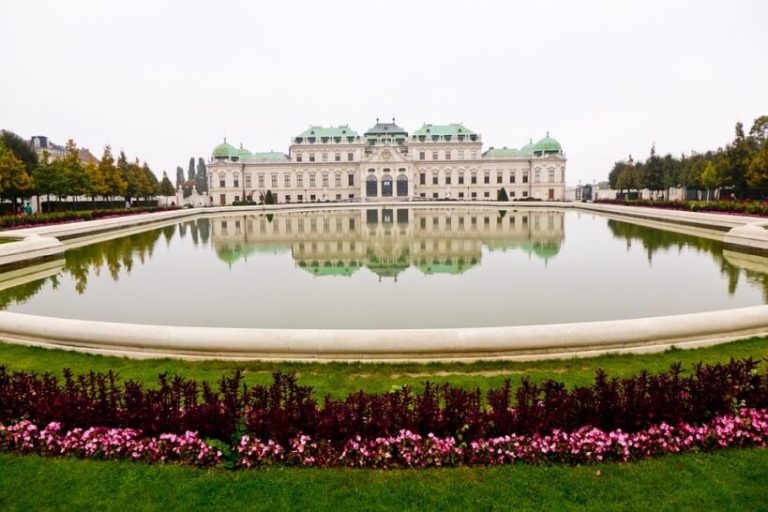 The Karlsplatz seems to be a pinnacle for the architecture lovers. The most beautiful underground station is located there with Art Nouveau superstructure, The Art Nouveau Pavilion, as well as Karlskirche (Charles’ church) one of the most recognisable buildings in Europe. You may enjoy those buildings sitting on the park bench surrounding the square. At the Karlsplatz square the Vienna Museum is situated as well, it holds the history of the city from neolithic to modern times. From there you head to Kärntner Strasse under 6 min 400 m

The Vienna Opera is one of the most recognisable operas in the world. It is the building erected at the Vienna Ringstrasse. The opera activity launched on the 25 May 1869 by performing the Mozart Don Giovanni opera, a composer strongly associated with Vienna. In May opera fans may enjoy the free performances. The performances are projected onto the huge screen mounted on the wall of the building. From there head to the Opering Strasse to…. 10 min 800 m

The Museumsquartier is one of the greatest and the most modern area devoted to culture. Museumsquartier, MQ for short has been established in the imperial court stables. In the 60,000 square meters a variety of art is located, galleries, libraries, restaurants as well as designer cafes that create the unique combination or Baroque buildings and modern architecture. Beyond that stretch the palace gardens… 1 min 100 m 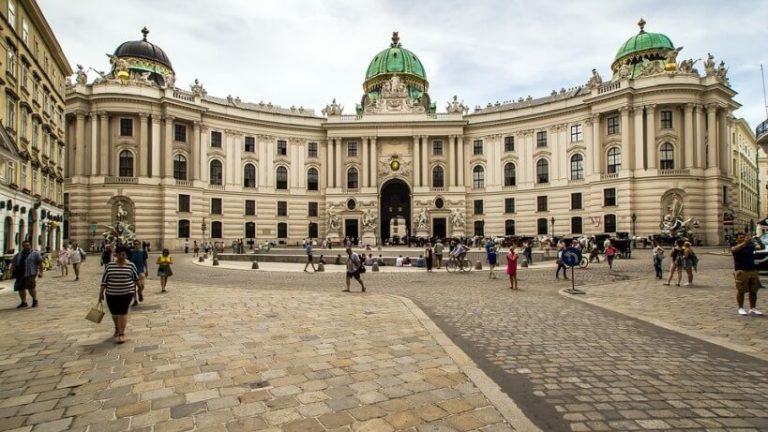 The 700 years old, palace is the former Habsburg family residence. The residence surface exceeds 240 thousand square meters. The building has been rebuilt many times and the chapel is the only original setting. The Baroque and Classicist styles are dominant there. The majority of the palace is occupied by the museum where you may enjoy the imperial apartments, among others. Every New Years Eve, the genuine imperial ball is organised in Hofburg. From the palace move along Kohlmarkt and Graben streets to….6 min 850 m

Known for variety of paintings, the cathedral is one of the most important buildings in the Middle Ages. It reaches the XIV century and the Babenberg dynasty. In the basement of the cathedral the Habsburg family tombs are located as well as other officials from the Austrian history and culture. The cathedral is located in the centre of the Stephansplatz square in the oldest part of the city. Due to its 137 tall tower the cathedral catches the eye in particular as it is the city landmark as well as the viewing point over the Vienna panorama. Move along the Kohlmark street to….17 min 1,4 km 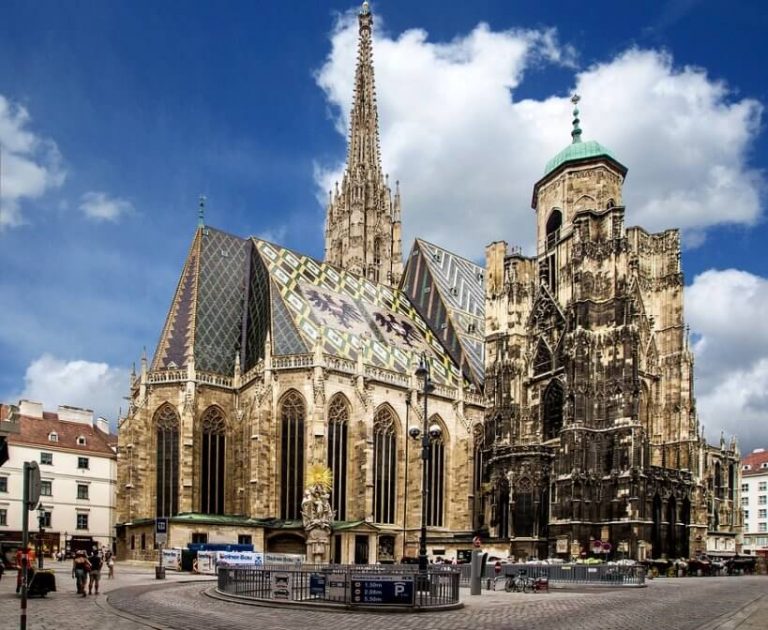 The Danube Boulevards are the best places to rest. The citizens of Vienna frequent the Boulevards to rest, play games or do sports. Along the river embankments a numerous of cafes, restaurants and cafeterias are located, where you could try the famous Sacher cake, for example. The Flex club awaits for the nightlife and dance hall lovers. Along the Danube Embankments move towards Schottenring Strasse and on to…..29 min 2,3 km

The university was established a year later the Jagiellonian University that is in the 1365. Interestingly, it took place on the 12 May as well! The university founder was Rudolf IV Habsburg. It is the largest and the oldest university in German speaking countries. As many as 93,000 students study there. The Vienna University is usually chosen by Polish students for the Erasmus exchange. From there you move along the Hörlgasse street past the Ringstrasse aquare, where you may come across….20 min 1,4 km

Neo Gothic building was erected in the XIX century and was meant to be a town hall from the beginning. In front of the building stretches the wide square along which the honorable citizen statues has been placed. The building faces the Ringstrasse, surrounded by the park with numerous benches where you may sit and enjoy the XIX century Vienna atmosphere. After a short break and rest it is time to leave the city centre! Enter the U2 underground and go until the Karlsplatz, where you may change to U4 to get to …..42 min 7 km 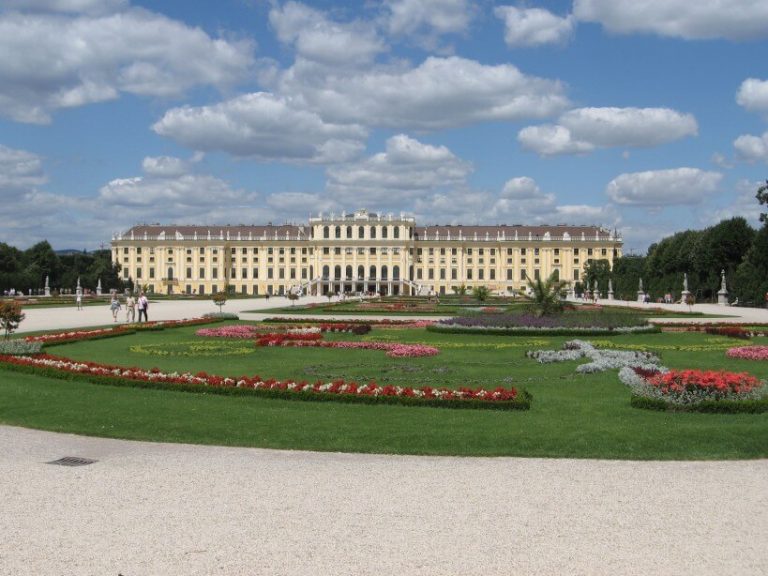 The palace is considered the most valuable living place due to its unique richness of architectural decorations as well as the marvelous park in French style with the boxwood labyrinth. The Vienna panorama may be enjoyed from the nearby hill with the viewing pavilion. It is a great place to sit and rest and ask yourself a question …..

evening in Vienna or shell we move on to conquer other capitals?
Should you choose to stay in Vienna than everything is clear… how about going to rest along the Danube Boulevards, where numerous concerts take place in May, should you choose Bratislava or atmospheric Budapest… good choice, you will rest on the train!

You will get to HBF railway station by 10A bus running every 10 minutes. 31 min 6 km

Consult the train schedule and book your ticket online now!