The panoramic trains are one of the ways to visit Switzerland. You may watch the Alpine passes, glaciers, picturesque villages, river gorges, the ski resorts on your way. To make the golden travel across Switzerland come true you have to use the Golden Pass Express offer.

The Golden Pass is the panoramic train in the world connecting Montreux and Zweisimmen. It is a common name for a few trains. They are Golden Pass Panoramic, Golden Class Classic and Chocolate Train. You may learn more about the last one in the Sweet train journey article.

By train across Switzerland

Travelling by the train will let you visit the most beautiful region of Switzerland. Starting with abounded in tradition central Switzerland to the magnificent Lake Geneva. It connects historic Lucerne, Interlaken, with covered in snow peaks of Jungfrau as well as the sunny Montreux on the Lake Geneva. The Golden Pass Express go past the eight lakes, six cantons, three passes and two language areas.

Golden Pass Panoramic is a modern train consisting of panoramic first and second class cars connecting Lucerne with Interlaken. The Golden Pass Classic, on the other hand, is very popular train designed after the 30’s cars of the last century. It is considered the most luxurious train in Europe. While on the board of the Golden Pass Express a passenger may enjoy the views through the large panoramic windows, and sitting in the VIP labeled seats may see everything from the perspective of a train driver. It is the only service in Switzerland offering the seats like those. 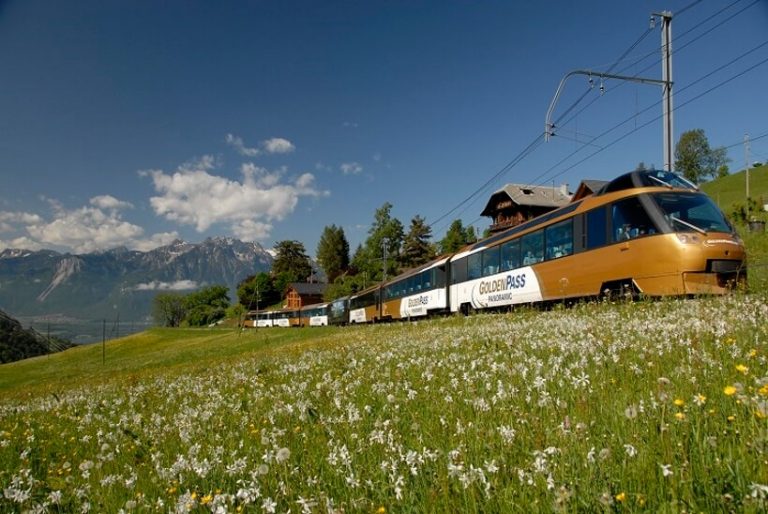 Leaving Montreux the train ascends over the Lake Geneva that lets you taste the brilliant landscape and admire the lake’s beauty. In Jaman, the train enters the tunnel. Then it crosses valleys and make its way towards the Châteaux d’Oex and Gstaad resorts. The Golden Pass Express reaches its highest point at 1274 m a.s.l. and calls at Zweisimmen, then the passenger continues their journey with Golden Pass Express towards Interlaken and Lucerne.

Travelling by Golden Pass is a spectacular panoramic train journey running from central to eastern part of Switzerland. It guarantees a traveller to enjoy that unique experience and admire the magnificent landscapes.

The train tickets for that panoramic train journey may be acquired at our website – Feel free to book the tickets.