Situated on the Danube, the capital of Hungary, is considered one of the most beautiful cities in the world. Budapest is in a natural way divided into two parts. Buda is a hilly green area. Its most important place is the Royal Castle, with its walls offering a magnificent view of the low-lying Pest and its numerous monuments. Despite the natural division, the city is perfectly connected – there is the world’s second underground, created in 1896, allowing you to move freely on both sides of the Danube. The proposed route is a 4-hour walk around the city. It depends on you how much time you want to spend in each place. 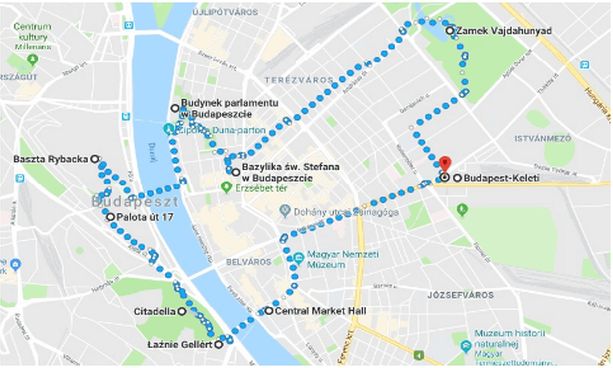 We start our walk around Budapest from the Keleti station. The station located in the city center was once called the Central Railway Station and in the 19th century was considered one of the most modern in Europe. From 1970 under the station at a depth of 28 m there is an M2 metro line station of the same name, which we will reach, among others, to the Parliament. In 2014, an M4 line was opened leading to the Gellert Hill on the other side of the Danube, we get on it and we go two stops to the Kalvin station (Kelvin Square) 8 min 2 km 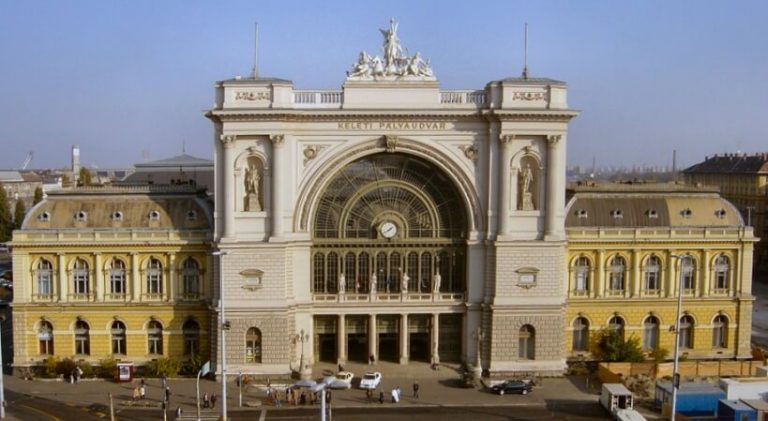 We get off the subway and go along Vamhaz Korut towards the Danube. After 300 meters we pass Vásárcsarnok, a secessionist trading hall from the 19th century, where we can stock up on local delicacies that will serve as a packed lunch for the whole day, including the famous Hungarian salami, ajvar and wine. The multitude and color of the products makes a huge impression, and the building itself is considered one of the most beautiful in Budapest. After leaving the market, we follow the Freedom Bridge towards the Gellert Mountain on the other side of the river. 13 min 1 km 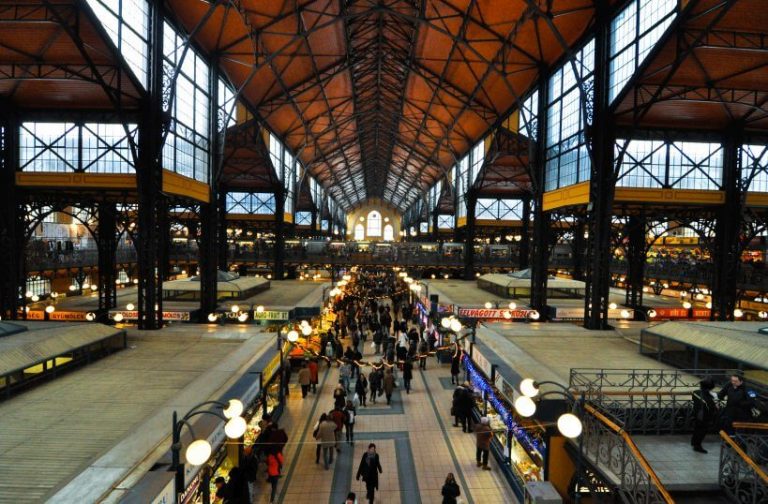 The hill, 235 m high, owes its name to Bishop Gellert, who according to a legend was killed here in the 11th century by the Pagans. At the foot of the hill at the beginning of the 20th century, the famous Hotel Gellert was built with a spa, whose baths are now considered the most luxurious in Budapest. Next to the hotel there is a unique place of worship – the church built in the rock in 1926. We pass it and follow the park alleys up to the Citadel hill on the top. 14 min 750 m 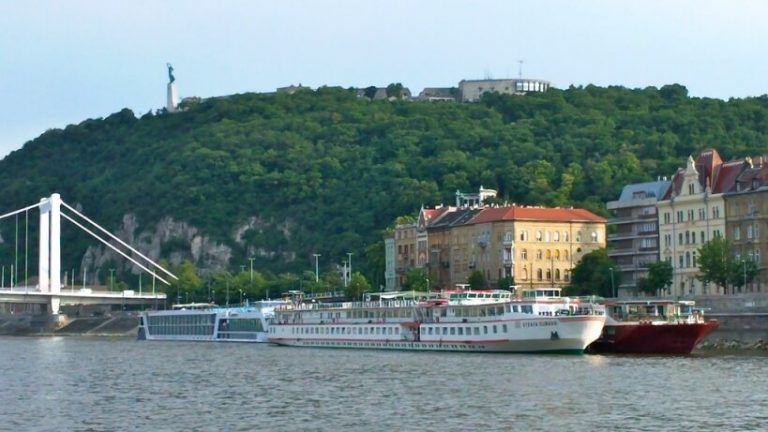 The citadel was erected by the Habsburgs after the fall of the 1848 uprising, as an expression of Austrian domination. This function was not fulfilled, because already in 1867, as a result of the national movements of the Hungarians, the Austro-Hungarian Monarchy was proclaimed. Today, there is a museum and a restaurant here. The top of the hill is a great viewpoint to Budapest. We descend towards the Danube, following the Friedrich Born street towards the Castle. 37 min 3 km

Towering over Budapest, the Royal Castle consists of several buildings from different periods. Its principal part was created in the eighteenth century under the reign of Maria Teresa, while the earliest comes from the 13th century. The last resident of the palace was Admiral Miklos Hortjy (1919 – 1945). After the war, the Castle was intended for museum purposes, now there is the Hungarian National Gallery and the Budapest History Museum. (open daily from 10 to 18). From the castle, we follow the park’s alleys in the direction of ….5 min 500 m 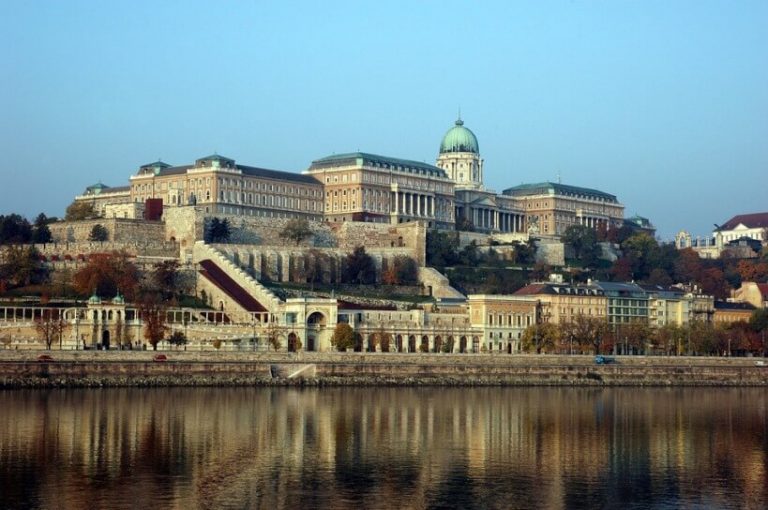 At any time of the day or night the tower is full of tourists, attracted by the most picturesque panorama of the Danube in the whole city. The building was built in the Neo-Romanesque style in 1895 for the guild of fishermen, which is why it owes its name. It is worth taking a break here and a glass of wine with a view of Budapest, and then head down towards the river. 10 min 800 m 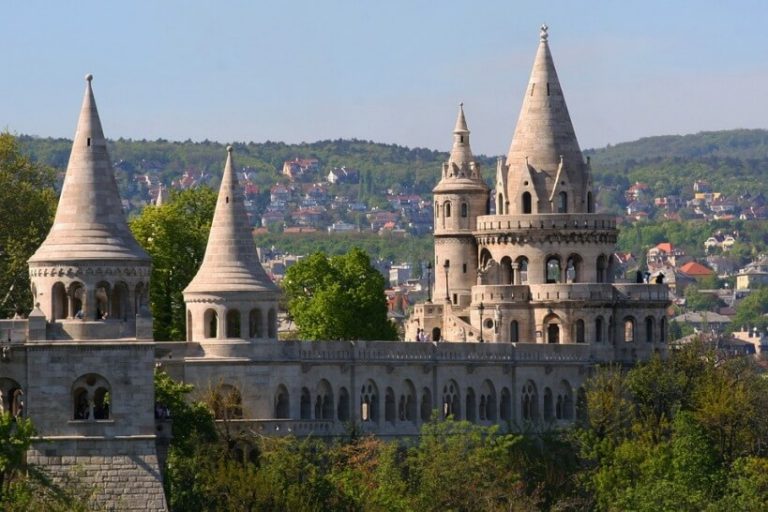 Built in 1849, it was the first permanent crossing between Buda and Pest. It owes its name to powerful chains, stretched between two towers carrying it. On summer weekends (July and August) is the place of artistic festivals. We pass it on the Antall József boulevard stretching over the Danube, towards the Parliament. 12 min 950 m

Regarded as the symbol of Budapest. Its full of extensive boulevards and Art Nouveau tenement houses reminiscent of the splendor times of the Austro-Hungarian monarchy. The building of the Parliament is modeled on the British, and its interiors are decorated with the works of eminent Hungarian artists. The building can only be visited with a guide. Free admission for EU citizens. From the square in front of the Parliament, we turn into the Nador street, and we reach … 13 min 1 km 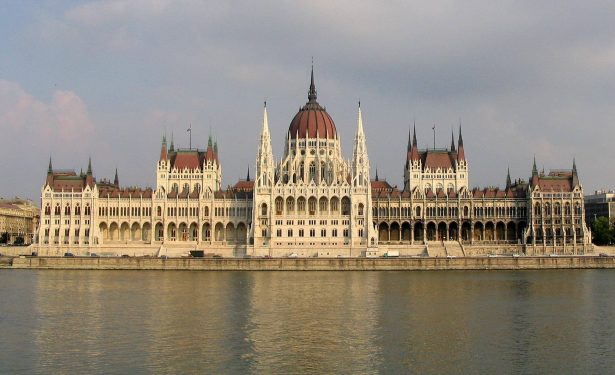 From the consecration in 1905, it is the largest church in the Hungarian capital. The St. Stefan relics are stored here, patron of the country. Its dome has exactly the same height as the dome of the parliament and is visible from almost every part of the city. From the Basilica, along Szant Istvan Street (ie Saint Stefan), we reach the Bajcsy-Zsilinszky underground station, which belongs to the oldest underground line from 1896. The shallowness of the tunnel will definitely surprise us! By M1 we go 6 stops to Hasok Tere station. 6 min 3 km

Hasok Tere, or Heroes’ Square, is the pinnacle of Andrassy the most elegant boulevard in Budapest with embassies, theaters and opera. The square connects it with the park part of the district, where the Vajdahunyad castle rises above the lake. A fairytale building designed by Ignac Alpar, combines different styles referring to other Hungarian monuments. It is the perfect place to relax after a day of sightseeing. The more so because we visited all the most important attractions of Budapest! 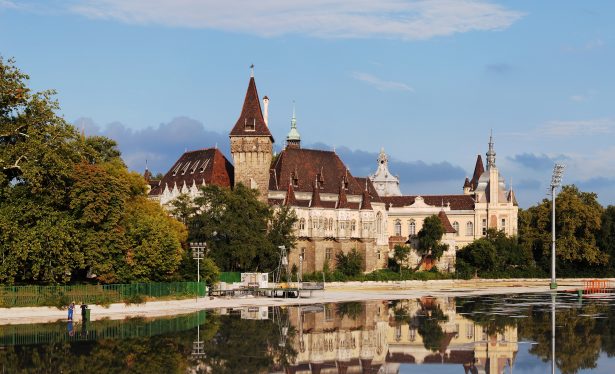 Now is the time for an important question – an evening in Budapest or are we heading to conquer the next capitals? The important question you need to ask yourself this day. If the choice fell on Budapest, the matter is simple … we go to rest in the park of the Szehenyuer Baths, and if historic Bratislava or imperial Vienna … a very good choice – we will rest while traveling by train!

To the Keleti station, where trains depart for Vienna, Warsaw and Cracow, we go through the park towards Thokoly street. 27 min 2,2 km

To the Nyugati station where trains leave for Bratislava, we can reach the already known M1 line and get off at Oktogon station, from where we can catch trams 4 and 6 and get off at the Nyugati stop or walk 800m on foot towards the visible station building. 20 min 2,8 km

Check the train schedule and book your ticket online now!

Railway tickets for these connections are available on through PolishTrains.eu